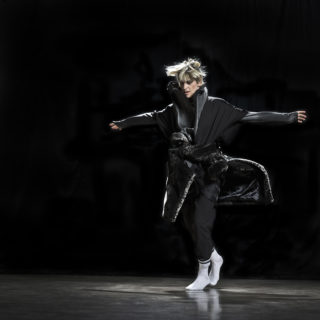 In addition to some technical elements Karolin invites the dancers to be aware of the body weight and to play with the rhythm of movement. In this particular class, she shares her interest in using the body as a drummer, varying with many different rhythms and using the body musicality to synchronize as a group. The dancers get trained in coordination and sense of rhythm. Her passion for details and energy through a choreographed form has brought her over the years to develop a very special way to create movement material – her mouth-beatbox system as a steady companion. She encourages people to dance without fear and hesitation, using physicality and full energy. Influenced by various dance techniques, floor work is a very important part of the class. In general, this class is usually considered a very powerful, joyous, and challenging class that attracts dancers who love the physicality of dancing.

Karolin trained at TIP – the Freiburg School of Dance, Improvisation and Performance (2009-2011). Since 2013 she works as a freelance dancer, performer, choreographer and dance teacher (2015: 1st prize at the national competition “Rauskommen! Der Jugendkunstschuleffekt”; 2018: Innovation Award Soziokultur, BKM Prize Kulturelle Bildung, Special Prize Zübliner Kulturtage). In 2014 she founded the DAGADA dance company with her first full-length work “loser” (further productions: “GRENZLAND” 2015, “radical matter” 2016, “the BLOB” 2017, “Androgynous” 2017, “MYTH” 2018). In 2018 she collectively created the interdisciplinary piece “T.” for the Freiburg Festival (Production E-Werk Freiburg). Her works were shown in Freiburg, Offenburg, Berlin, Basel / Switzerland, Brest / France and Haarlem / Netherlands. Since 2017 she is receiving the three-year concept funding from the city of Freiburg.