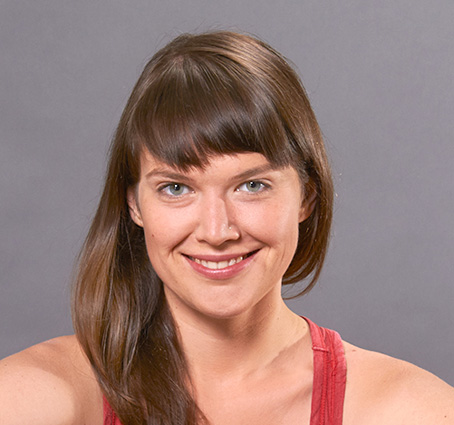 The class is a technic and impro class. It focuses on spinal mechnics, shapes, the shapeless and seeing.

Before pursuing dance as a profession Zina Vaessen studied sociology in Geneva, music and movement pedagogics and singing at Musikhochschule in Trossingen, Germany and in Stockholm. She went on to complete the TIP program, Schule für Tanz, Improvisation and Performance, in Freiburg in 2013, after which she began an intensive collaboration with the company OFFSPACE. Supported by the city of Freiburg, Kassel and Basel, the company has produced three of my stage works: Memory Fiction, Buchkörper and Okra. Currently she is supported with a stipendium by tanznetz|freiburg reiburg allowing for a choreographic research mentored by the choreographer Jana Unmüßig. Her lastest works are April`19 and form.alie.

“I a lot out of watching people`s movements. I enjoy unusual shapes and timings: Movements, which are slightly twisted. A twist that is only noticeable when you really look. For this reason, my work focuses on the process of watching. – I struggle a lot with being constantly slightly irritated by the world around me. I guess as a result I like to make things which capture this irritation –  but then by nature are in themselves irritating.”